If your schedule allows, kindly tune in later TODAY for my on air interview with Janine Santana on http://party934.com/Janine/.

We will be discussing “THE CREATIVE PROCESS” from a drummer’s perspective within the musical genres of Jazz, Latin Jazz and World Music. Chosen by my host shall be two selections demonstrating my contribution to “Zapata” (The Latin Connection) and “Nu-Po” (Donny Hathaway “Live” at Carnegie Hall).

Janine live hosts Jazz, World, Latin and Blues programs at the stated times - streaming at www.party934.com/Janine and on 94.9FM in the Hudson Valley! Also, Janine is a rotating on-air host streaming at www.KUVO.org ( Denver), or 89.3FM Denver, 89.7 Breckenridge, 88.5 Vail.

Janine "NiNi” Santana is a musician, actor and recording artist, leading her 12 pc Latin Jazz project, and appearing as a side player on numerous recordings in jazz, world and rock, including some national and international acts. She has toured the United States and collaborates with a number of artists, including Alto Madness bebop legend Richie Cole, and Tito Puente's music director and current co-leader of the Mambo Legends Orchestra, Jose' Madera who are regular Members of Janine's band and appear on her Soft as Granite recording. Currently in pre-production for another recording as leader, NiNi's story will also be made into a documentary film. Watch her website www.janinesantana.com for updates and more detailed concert and performance information.

Thanks Janine for your kind invitation – it was quite fun sharing “behind the scenes” concepts on our topic: “The Creative Process.”

Hope you enjoy it... I'll have a link to the interview after it airs - and, of course, I definitely mentioned Boomer during the 27 minutes of the show. I'm told it will appear quite early in Janine's 2 hour segment. 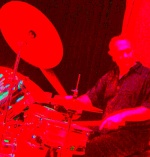 Thanks for listening in. Now that's its been aired, here's the full mp3 link to the entire program [provided by permission] and on my hosting page.