Nice photos and video from Boomer's visit to Virginia on April 2nd 2018.

If he were in Evanston,
I would have made it
go right to see him even
in my condition. What he
means to me and this album
especially.... I cannot estimate.

It changed my life.

Wow! Randy and Billy together, again?!

It has been a long dream/fantasy to see
that happen again. Oh, that we could
have Michael up there too!

Time marches on but what a fine configuration
to hear the great classic sounds to!

Cheers to father of us all!!

Wow! Randy and Billy together, again?!

It has been a long dream/fantasy to see
that happen again. Oh, that we could
have Michael up there too!

Time marches on but what a fine configuration
to hear the great classic sounds to!

Cheers to father of us all!!


I agree Pete
Nice of Phil to add a Video.
Great a CD is out soon.

I am trying to make arrangements to
be there, Boomer!

Have to see about their handicap read-
iness and then need to be accompanied.

Of course, it would be wonderful to see
you, again. I am sure Randy won't re-
member meeting me at Smuckers way
back in the 1970s but it will be a real
pleasure to see him too!

Of course, a third of me is missing but
I can still enjoy both of you. It will have
to be the early show, most likely.

I have secured seats on your right in
that lower section. It will be the 5pm.
We'll arrive early to settle in.

It will be great for us to see you again!

My wife tells me that people are finding
out through the grapevine that I am to
be there with you and have the Boomer
fever. I might be accompanied for the
show. They need not be a part of the
pre-show. I am looking forward to it.

sorry I haven't logged in for a while. Went to see Boomer last night at the Blue Note. Spectacular show as the band has gotten so much tighter from when I saw them last year at Sony Hall.

The addition of Randy Brecker to the band has made such a difference and he and bassoonist Paul Hanson blend so nicely on the horn fills , and their solos are mind-blowing ! Both use pedals with electronics which changes the sounds of their horns tremendously.

Guitarist Fareed Haque has stepped up his game as his guitar is much more pronounced in the mix and he also has electronic effects.

They played for 90 minutes. The songs were : Crosswinds, Pleasant Pheasant, Savannah the serene, Spanish Moss, Under the Bow Bow Tree, Time Lapse Photos and Red baron. the two new songs are off the new CD called Time Lapse Photos which Boomer said should be out end of next week .

The band is on tour all over the place and will be back in NY in October. Thanks for another great performance Boomer ! 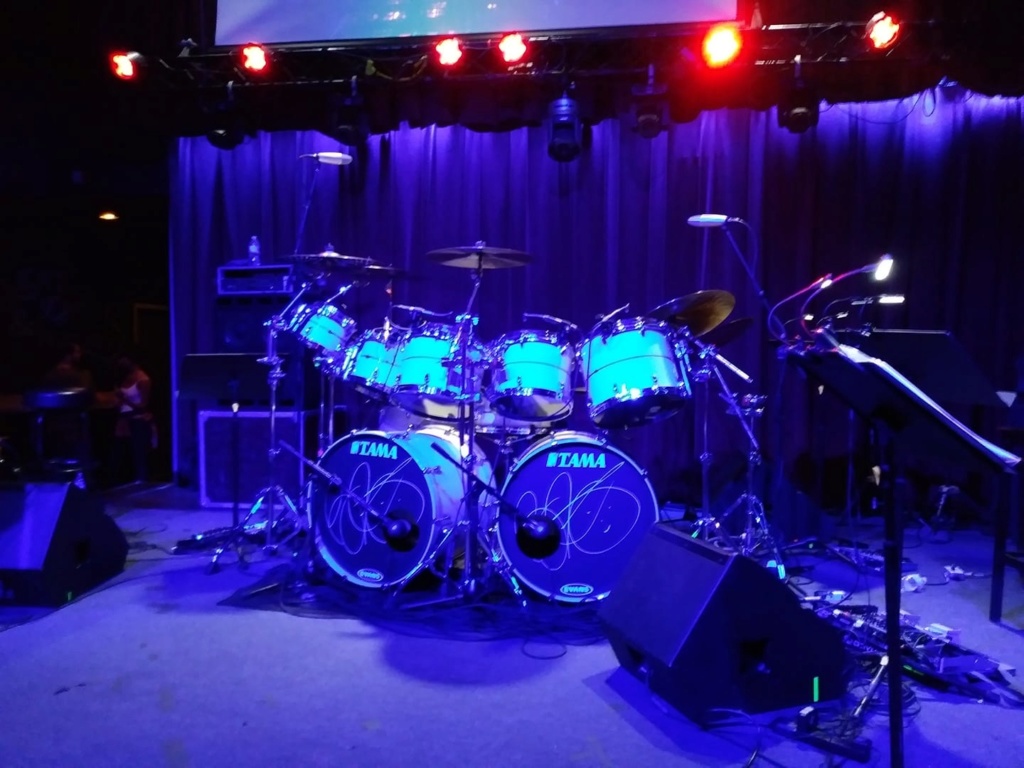 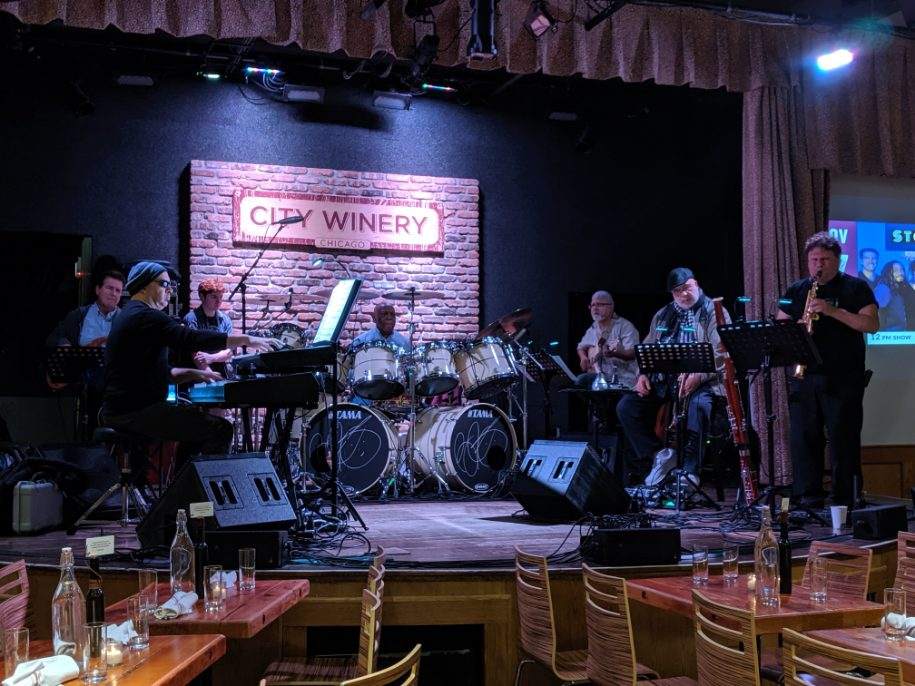 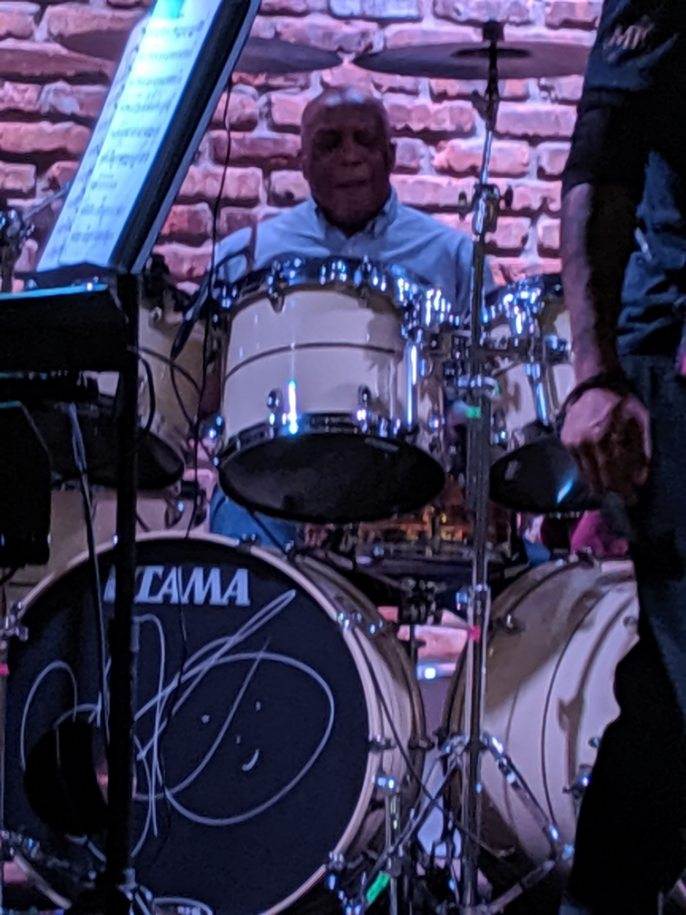 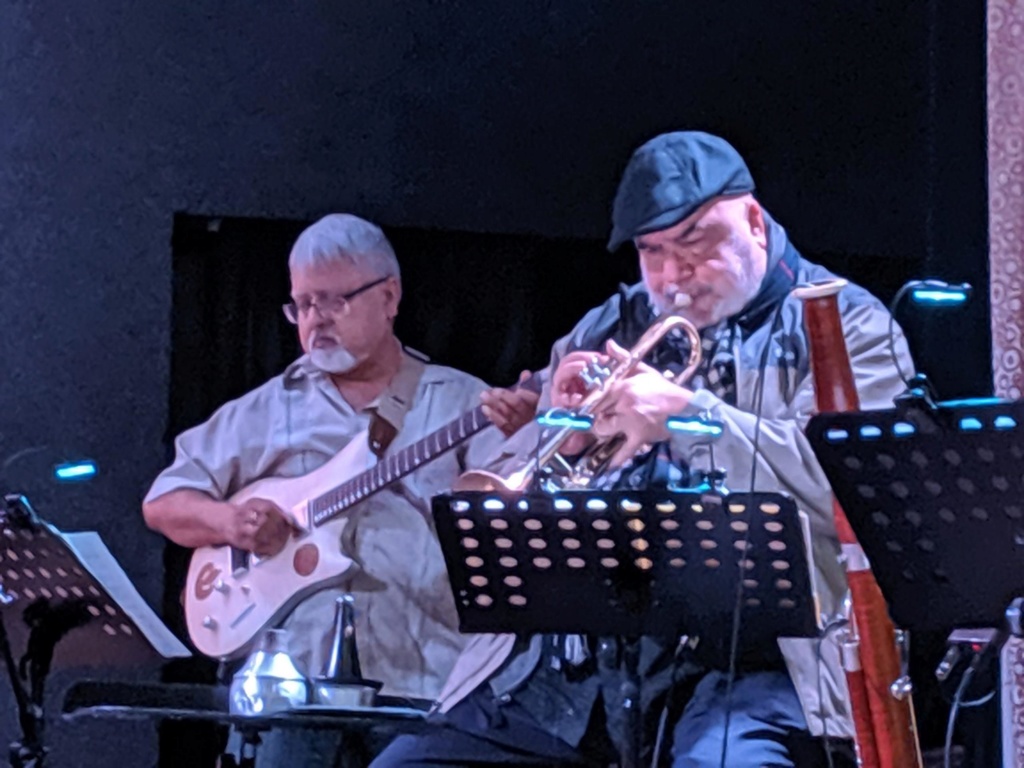 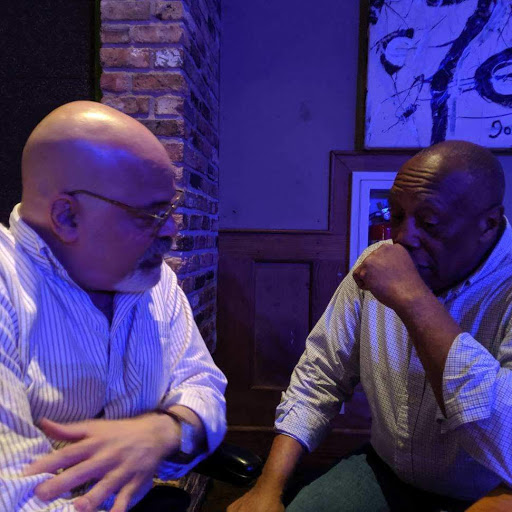 We arrived for the sound check. It was the first of the two shows in
the City Winery, Chicago.

That was the band:

Then, there Billy, Randy and then Billy and I at the table.

Billy is the most wonderful man. What can I say? We talked for
a while and he brought up that story about Pat Martino that I
had totally forgotten about - the fact that Pat had an accident
and then lost all of his memory and how Gil Goldstein helped
to bring that musical memory back because he did not know
or remember who he was musically. It was all connected to
Billy having helped me with my arm and going left-lead and
how the brain functions etc.

I did not get a picture of him but the great Vic Salazar was
there and we shared stories. I wish I had my wife photograph he
and I. He is a wonderful guy, too. He has so many stories.

The show was kick-ass. My seat could have been better for
seeing Billy but (you cannot see it in the picture) being with-
out my leg and pelvis and having the dead left leg, I was on
a scooter and I needed to be at an edge of a table. Still, they
had Hendricks and I can picture everything Billy was doing
in my head.

Paul Hanson is such the addition. I saw some video of him
and he really is quite the artist.

Scott Tibs on the Rhodes brought it all back. Of course, he
did it up on the other keys, as well and was fabulous.

Fareed Haque is a phenomenon. He is perfect always and
in every situation.

Tim Landers did it again - laying it down and had a really
nice set of alternating measures for his solo, which we all
really appreciated.

Randy was/is Randy. He did not remember my story about
him and I know they had to get going after but nothing can
be said about him. He is like Billy is to the trumpet.


I will write more soon.