Another great cover! I like the way you bend vocal notes. Horn section sounds great. May wanna correct the title on youtube to Superstition . . . I grew up with that tune on our jukebox. I never knew or would have guessed Wonder wrote the song for Jeff Beck:
http://en.wikipedia.org/wiki/Superstition_(song)

Good friend's 8 year project no longer in existence, but he wrote all the charts:
http://www.steviewondertribute.com/

Yes, Woof, it is "Superstition" and not "Superstitious". I'll fix that. Interesting! I didn't know Stevie had written that song for Jeff Beck.

As always, thanks for listening and your comments.

Don, I don't claim to be an expert on funk (after all, I am just a drummer from Greece...) but I love it and have listened to it enough to be able to recognize it when I hear it. And you definitely got it!
I watched the clip and I thought, "how can he (you

) sound so funky while playing such a simple groove...". Then I read your "that's were it started" thread. And yes, you are right, it has to do with how you "hit it", but most important you've got to feel it and be able to make the listener feel it too. I don't know whether it's got to do with playing behind, on, or ahead of the beat, but you sir feel it like nobody's business!

First, Let me say thank you for your kind words and inspirational compliments. I'd be a liar if I tried to deny that they meant anything or made me feel happy and even a little proud.... Thank you, most humbly.

Second, You are not "just a drummer from Greece." Music knows no regional boundaries. It's all yours for the taking should you decide to go after it. You have something to say that's just as valid as anyone else. It may or may not ever make on the radio or in a record store, but no less valid does that make it.

It makes no difference what style of music or musics it may be. should you pursue it with enough desire and passion, you can play it just a well as the next person if not better.

As far as playing funk goes, I believe a simple question only requires a simple answer. I approach playing this music the same way. Once you understand the emotional make up that makes it funk. You will then understand that from a technical position it's not really hard to play or pull off at all. What makes you sound that much better as a drummer is when the other musicians playing it along side you understands that also.

It sure helps when the other players understand what's going on. And as a drummer, having a solid bass player is a must. It' makes it hard to emotionally lock into this music if you're busy carrying the bass player, and that can be from a bassist who's just not cutting it to another who knows the ropes but is doing way too much. So when playing this music, It's important to know when it's NOT your fault when it's not working.

If I were to advise a rule of thumb here, assuming there is one, I'd say lay it back. And by that I don't mean play behind the meter, I simply mean to relax, lay the beat down. If it feels good and natural to you then it's very likely you've hit pay dirt.

Trust yourself... Play what the music makes you 'feel'. If you do this 10 times, it will work at least 9. I personally believe that a big mistake that's made in playing any kind of music really is many players play time rather than feel. The hi hat has that steady tic, tic, tic, tic, consistent pattern, the dynamics are all the same and there's no expression, just solid time and you need more than that.

Experiment hitting different areas of the snare drum at different sections of the same song. If you listen to Superstition again, you will notice that I play the outer edge of the head when the sax solo starts. You can tell this by the harmonic overtone that begins here.

Experiment with different dynamics, using pulse on the hi hat and then not using pulse. Accent different areas of the bass drum pattern. This is what I mean when I wrote about understanding how and where you hit the drums. You don't have to play a "funk beat" for it to be funky. It wasn't WHAT John Bonham played as much as it was HOW he played it that made what he did stanky, fonky.

Listen!!!! To yourself as well to those around you... Relax, relax, relax... Forcing it will never work! let the music move, groove you, yet while you remain in control... I think you will find the journey a fun one.

And thanks again, Harris for your kind comments.

Don, thanks for the advice! Of course it’s easy for you to say because you already got it!

Just kidding (Not about the you "got it" part. That's a given!)

Yes, the "laid back" thing about funk is something I understood years after I started playing (here’s where the country/environment comes in, I guess), and I still haven’t been able to incorporate it completely in my playing.

As my former drum teacher once told me, "You understand the licks, the syncopation, the dynamics etc. All you need is to try to stop playing funk like a rock drummer, and instead of pushing the beat, try to pull it back a little…" (If my translation makes sense. Back then it didn’t make sense to me even in Greek!).
I am trying, and I hope I will at least get close, but till then I can sit back and enjoy (or get up and dance to!) a real nice funky tune when I hear it!

All the best to you. 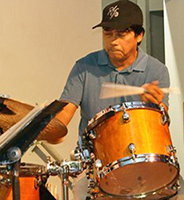 That was great D! Love that 2 and 4 on the snare...keeps things in check and grooving.

The sound is'nt too bad considering being on YouTube. The bass, snare and HH are heard.

Nice job and I was not aware you sing as well. Great job!

Racman wrote:That was great D! Love that 2 and 4 on the snare...keeps things in check and grooving.

The sound is'nt too bad considering being on YouTube. The bass, snare and HH are heard.

Nice job and I was not aware you sing as well. Great job!

Thanks, Rac... I have the original clips on my computer and they are very clear. What you see here on youtube doesn't even compare because of all the compression that goes with uploading these clips. There is a way to do it in HD but I don't know how that works at the moment. I have a nice set of speakers and a sub hooked up to my computer and the sound is pretty killer too. Audrey took these videos on her little Cannon Power Shot digital camera that has an 8 gig memory card in it. This little thing is quite amazing. It takes even better still shots.

You are one of the FUNKIEST drummers I know Don! And your vocals are on point.

It's the entire HOUSE!

Go on with your bad self dude!

Others... listen and learn!

I give this seven stars (as in complete on a TOTALLY different scale):

Thank you, Uncle. To read this from someone with such a steller degree of drumming talent and a resume that would make most in the entire music industry envious,,,, It means my heart.

You always make me smile when i see these videos of you singing. You got it man...I like the nice bit of overtone on the snare drum.
What kit was that you were using? a Pearl possibly?

You always make me smile when i see these videos of you singing. You got it man...I like the nice bit of overtone on the snare drum.
What kit was that you were using? a Pearl possibly?

Thank you, D.L. That's my trusty Pearl Export. It's been EVERYWHERE with me and sadly, it's beginning to show it. The bushings in the tom holders are pretty worn so when you tighten them down, there is still some play and you can move the toms up and down about a 1/4 inch with your hand. I never really liked Pearl's tom mounting system anyway. The bass drum hoops are metal and over the years the hoop has crushed somewhat where I clamp the pedal on and now I have to use folded pieces of cardboard and paper to keep the pedal on tight.

At the end of a night of playing I just about have to use a sledge hammer to get the wing nuts loose so I can pack it away. They just don't wanna break free for some reason and it really hurts my fingers working that hard to get them loose. When you mic her up, she sounds heavenly, but the old girl is tired. She's the only woman I ever beat on so to speak and she's about had enough. My reliable and faithful 12X6, maple, Pearl snare drum is still kickin hard though. I'm happy about that... It's the best snare for me for what I'm doing right now. I can't tell you how many compliments I get on the sound and tone that drum puts out. I don't know what the folks at Pearl were thinking. I only paid $150.00 for it brand new and it's among the best in their line as far as I'm concerned.

Thank you again for the kind compliment, David.

May the "wear & tear" never stunt our growth.

We're all students with capacities far greater than the equipment we haul.